Steve was born in Decatur, IL before his family moved to the Kansas City area just before he started Kindergarten. He graduated from Shawnee Mission North High School in 1986 and later graduated from Emporia State University in 1992 with a degree in Elementary Education. In addition he holds a Master’s Degree in Curriculum and Instruction from Mid America Nazarene University as well as a Master’s Degree in Building Administration from Pittsburg State University. In addition, he earned his Colloquy from Concordia Seward, NE in July 2014. His past classroom teaching experience includes ten years in 6th grade and four years in 2nd grade; he has been a building administrator for 11 years. He also coached boys’ high school basketball at Shawnee Mission Northwest. In his spare time, Steve enjoys outdoor activities with his family including biking, running, sports, and camping.

Cindy was born and raised in Kansas City, MO (Missouri is known as God’s country!). She graduated from Overland Christian High School, earned a Bachelor of Arts in Elementary Education from Mid America Nazarene University as well as a Master’s degree in Early Childhood Curriculum and Instruction from Emporia State University. Before coming to CLS, Cindy taught Pre-K at the Johnson County Community College Child Development Center for 15 years. This is her 14th year at CLS teaching kindergarten to the incredible kindergarteners! In her spare time, Cindy enjoys hiking, swimming, doing Bible studies with her ladies’ group, photography, reading, and going to her niece and nephew’s sports’ games.

Ellie has lived in Olathe, KS since she was 8 years old and later lived in Alaska for 5 years when she was first married. She has a Liberal Arts degree and was formerly a paraprofessional in the DeSoto School District as well as a preschool teacher for Johnson County Community College. This is her 14th year at CLS and she currently works in the Kindergarten classroom. In her spare time, Ellie enjoys golf, riding her Harley, movies, and restoring old furniture.

Lori was born and raised in Brownsburg, IN.  She received a Bachelor’s of Arts in English from Indiana University. She recently completed her Master’s in Elementary Education from the University of Saint Mary.  Lori spent 3 years as the Christ Lutheran School Kindergarten assistant from 2005-2008 and has substituted at CLS for the last 5 years.  She enjoys reading, running, yoga, and spending time with her husband and 3 children.

Eileen was born and raised in the Chicago area.  She earned a Bachelor of Science Degree in Elementary Education from Valparaiso University.  She taught Kindergarten and Preschool in years past at other Christian schools.  This will be Eileen’s 15th year at CLS teaching in the 1st grade. In her spare time, she enjoys reading, gardening, movies, and spending time with her two granddaughters. 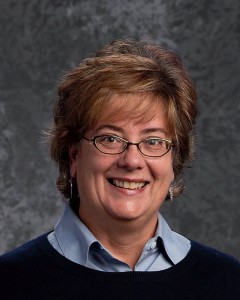 Rebecca was born and raised in Monroe, MI. She received her Bachelor of Arts in history and music from Concordia in Ann Arbor, MI. She has been at CLS since 2001 and served on the Board that developed the school and the Classical model. She currently teaches 2nd grade. In her spare time, Rebecca loves to antique, visit historical sites, and art museums. She spends as much time as possible at Lake Michigan, loves University of Michigan football as well as Detroit Tigers baseball.

Karen was born and raised in Monroe, Michigan. She received her Bachelor of Science Degree in Education from St. John’s College, Winfield, Kansas. This is her 21st year teaching in Lutheran schools, the last 16 at Christ Lutheran. She currently job-shares Second Grade with Mrs. Rebecca Harmon. Karen enjoys spending time with family, friends and her Wheaten Terrier (Bear). She also enjoys traveling, biking, baking, reading and loves the Michigan Woverines. Go Blue!!

Debbie loves teaching 3rd grade at Christ Lutheran School. She was born and raised on a farm in southeast Kansas and received her undergraduate degree from Pittsburg State University in 1988, where she met and married Dave. They briefly lived in Wichita before moving to Overland Park in 1994. They have a daughter, Taylor, who graduated from Kansas State (Go, Cats!) and teaches in the Olathe School District as well as a son, Steve, who is a recent graduate of Olathe East. Debbie previously spent 11 years in the Olathe School District teaching 2nd – 5th grades. She enjoys reading, traveling, and spending time with her family.

Alicia was born and raised in Paola, KS.  She attended Emporia State University where she received her Bachelor’s of Science in Education Degree in 1999 and her Master’s in Instructional Design and Technology in 2009.  Alicia taught in public schools for 14 years before taking a year off to have her third child.  She returns to teaching, joining Christ Lutheran School as the 4th grade teacher.  Alicia enjoys spending time with her husband (Brian) and their children (Makinley-8, Grant-6, and Gracelynn-3), taking walks, reading, and dreaming about traveling to the beach.

Lesli was born in Kansas City, MO and moved to Overland Park, KS when she was 6 years old. She is a Shawnee Mission West HS grad – go Vikings! She earned her Bachelor of Science with a minor in History from Evangel University in Springfield, MO. She taught in Brussels, Belgium from 1993-1995. Lesli started at CLS in the fall of 2009 teaching part-time in various teaching roles. She became full-time in the fall of 2010 with 5th grade homeroom as well as Literature for 6th and 7th grade. In her spare time, Lesli loves to travel. She also loves reading, photography, and trying anything new. In addition she enjoys sports, the arts, shopping, and eating out.

Sara was born in Omaha, NE and moved to Olathe, KS in sixth grade. She graduated from Olathe South HS in 2001, Concordia University – NE in 2004 with a Bachelor of Science in Elementary Education, and recently earned her Master’s degree from Concordia in Seward, NE. Sara is entering her 9th year at CLS as the 6th grade homeroom teacher and middle school math teacher. She enjoys spending time with her husband Mike and their three boys in whatever free time they can find. Sara also enjoys all sports, reading, and being outside.

Jenna was born and raised in Olathe, KS. She attended Kansas State University for two years and transferred to UMKC. There she received her degree in middle school education, with an emphasis in science. She has one year experience teaching 6th grade science in the St. Louis area. This is Jenna’s 5th year at CLS. She is the 7th grade homeroom and 5th-8th grade science teacher. In her spare time, she enjoys spending time with her family and doing just about anything outdoors. She also loves to read and cook.

Mike was born in Lakefield, MN and lived there until he was 9 years old. From there he moved to and lived in Osmond, NE. Mike earned a degree in K-12 Health and Physical Education as well as Secondary History from Concordia University in Seward, NE. He also has earned his Master’s degree from Concordia in Irvine, CA. This is his 9th year at CLS as the 8th grade homeroom teacher, junior high Logic and History teacher,  8th grade Religion teacher, and K-8th grade P.E teacher. In his spare time, Mike enjoys time with his family, reading about history, and anything related to sports.

Trisha was born in Kerrville, Texas and moved to Wall, Texas at the age of 9.  She received a Bachelor of Science in Curriculum and Instruction from Texas A&M in 1991.  Her teaching career includes Lutheran schools in Baton Rouge, New Orleans, Indianapolis, and Alma, Kansas.  Trisha works in the middle school teaching Technology, Spaulding, and Shurley English.  She and her husband are the proud parents of three boys.  Trisha’s favorite things to do are traveling, antique shopping, and spending time with family.  In her spare time, she enjoys gardening, baking, and watching SEC football.

Mary was born in Springfield, OH and in 7th grade moved to Carmel, IN. She has acquired 83 credit hours towards a double major degree in Early Education and Psychology. In the past she was a homeschool teacher for two years in Maryland as well as taught Latin at the Christian Leadership Academy in Michigan. Mary started with the Early Education Center as a preschool teacher in 1999. In 2001 she became part of the K-8 day school as the art and Latin teacher. In her spare time, she enjoys reading, painting, visiting art museums, and traveling.

Brian was born and raised in Omaha, Nebraska. He started at the UMKC Conservatory of Music in 1990 and earned a B.A. in Music in 1995. He began teaching as a school music teacher in the late 1990s while completing a Music Education degree. After five years of teaching in the inner city, he began graduate coursework. In May of 2016 he earned his Doctor of Music Arts in Composition degree at UMKC. This is Brian’s 6th year at CLS where he currently teaching the fundamentals of music for all grade levels (including choir) as well as leads our band and orchestra programs. In addition, he is our aftercare director for the after school program. In his spare time, he composes music a good portion of the time. For fun and renewal, he enjoys skiing, biking, boating, swimming, camping and attending sports events (He is a fan of the Kansas City Royals and Chiefs as well as Nebraska football).

Christine was born in Lincoln, NE.  She was raised in Fairbury, NE and moved to Hutchinson, KS in 7th grade. She received an Associates Degree from Hutchinson Community College and a Bachelor of Science degree in Marketing from the University of Nebraska – Lincoln.  Christine became the Administrative Assistant for CLS in January, 2015. Prior to that she ran an in-home daycare for the previous 5 years. In her spare time, she enjoys spending time with her husband, Todd, and their 6 children.